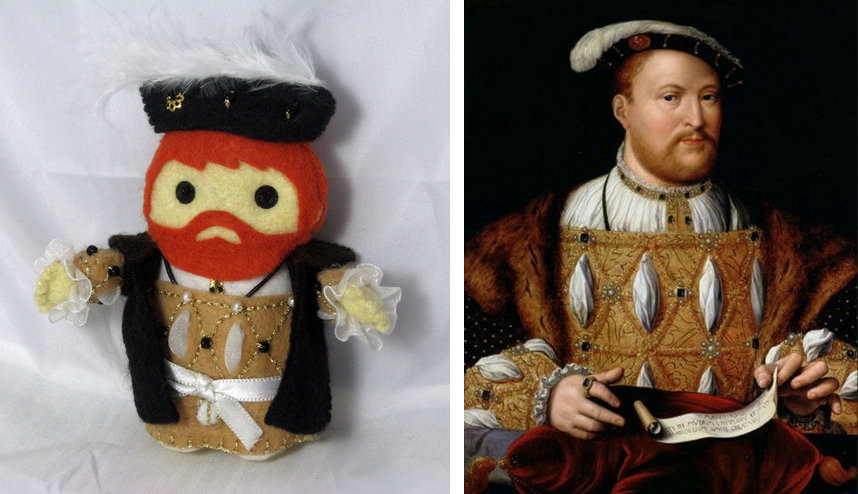 There was once an English bloke called Henry who, after conquering the crown by battle, started off the Tudor dynasty as Henry VII.

He had 2 sons, but the eldest died and he was succeeded by his youngest boy, Henry of his name (stunning originality for baby names, don't you think? ;D), 8th of his number.

He got a special permission from the Pope to marry his older brother's widow, Katherine, a Spanish princess.

And they lived happily for a while.

Unfortunately, all but one of Katherine's children died at a young age. The surviving child was a daughter, Mary.

Henry had a wondering eye and was quite fond of his queen's ladies in waiting (as you'll have further proof as the story unfolds). One of those who caught his attention was the pretty Mary Boleyn with whom he even had a couple of children.

But Henry craved a legitimate male heir above everything else, so, as Katherine got older, his eye went to another of her ladies-in-waiting and his mistress Mary's sister: Anne Boleyn.

And he turned the world upside down to divorce Katherine and marry her in hope of them having a son. That meant that even old friends and councilors had to thread very lightly in their relationship with Henry and some even lost their lives in the clash. Such was the case of Thomas Wolsey (inspired by his persona in the HBO series The Tudors).

But one man's downfall is another's rise to glory. Thomas Cromwell (also inspired by his The Tudors character) was one of the strongest advocates of the English Reformation and became chief minister to Henry's court.

However, Anne also only gave him one surviving daughter, Elizabeth, and that wasn't acceptable to Henry's big dynasty plan.

Without the protection (although scarce as it was) of an Emperor nephew, like Katherine had, Anne was to be disposed of in a more definite way than divorce, and Henry had her accused of adultery (among other things) and summoned a French executioner to put Anne to death.

And poor Anne Boleyn was no more...

And there was Henry. King of England, leader of his own religion, free as a bird and in want of a male heir.
What was a guy to do but get a third wife?

So, 11 days after Anne's death, he married her former lady-in-waiting, Jane Seymour, who quickly became pregnant. Would it finally be a boy? Or would Fate trick Henry out of his dreams once again?

For 3 years Henry remained a widower, but, eventually, he returned to his marrying ways.
Surprisingly as it may seem given his past record of ONLY one divorce and one beheading =P, princesses weren't exactly knocking down his door at the time and it was a while until he settled his sights on a portrait of a certain Anne of Cleves and decided she was to be wife number 4.

Arrangements were made but, once she arrived in England and he saw her in person, he decided she wasn't to his liking after all and got the marriage annulled. However, unlike his previous botched marriages, he did give her a nice tittle and income and allowed her to keep her head. Lucky girl! But maybe it was just Henry being grateful, because being married to Anne, although for a short time, ended up settling him with his 5th wife.

Catherine Howard was a beautiful young girl who was serving as lady-in-waiting for Anne of Cleves (talk about having a type!) when she caught Henry's eye and, soon after the annulment, became his queen. History has it that she ruled supreme over Henry's heart for a while, but, nevertheless, she too had a spectacular fall from grace. Once again, Henry VIII had a wife accused of treason due to infidelity and sentenced her to death. It is commonly accepted that, unlike her cousin, Anne Boleyn (beheading ran in the family, so it seems...), she was indeed unfaithful to Henry with a courtier named Thomas Culpepper (inspired by The Tudors).

And poor Kitty Howard (my first version of the same portrait, can you tell?) had a date with the executioner... =(

But, if we know anything about Henry by now, is that wifelessness isn't a state he likes to be in.
Cue wife number 6, Katherine Parr.

Well... His reign wasn't exactly long, I'm afraid... Never having had a strong health to begin with, Edward died when he was just 15 years old. Next in line?

Surprise, surprise! Cunning little Edward wasn't very keen on having his older AND catholic half-sister Mary getting the throne, so he named a protestant cousin as his heir. A cousin named Jane Grey.

But her story as Queen of England was even shorter and quite sad. A puppet in the hands of ambitious families, poor Jane was Queen for just 9 days before Mary's faction overthrew her. One year later, she was beheaded. And so began the reign of Mary I, also known as Bloody Mary.

But Mary didn't rule for that long either. 4 years later, Mary died, childless, and left the throne to the dark horse of the Tudor race, her protestant half-sister Elizabeth.

Elizabeth Regina. Gloriana. The Virgin Queen. The "useless" girl that her father didn't want, Elizabeth I marked what is considered by many has England's Golden Age, a period of amazing economical and cultural expansion during her 45 years reign.

However, that came with a personal cost. Elizabeth couldn't afford the alliances/rivalries ratio any marriage would create and chose to remain single.

She had several favorites throughout the years, but none as special as Robert Dudley, earl of Leicester. (Bit of trivia: his brother was Lady Jane Grey's husband.)

Elizabeth's reign saw the works of William Shakespeare and the exploring of the Americas with Walter Raleigh, but, like with every ruler in known History, not everybody was happy for her. Even though the religious debacle was no longer at its peak, opposing factions still arose and one pretty catholic menace came down from Scotland.

Mary Stuart, Queen of Scots' life is a soap opera all of its own but, on the Tudor context, she was just one more menace to the ruler. Eligible to the English throne due to being the granddaughter of Margaret Tudor, Henry VIII's sister, Mary spent 19 years in custody until a final plot convinced Elizabeth that the threat was too great and finally sentenced her to a death by (clumsy) beheading.

But, as Tudor History goes, there is always a twist. Elizabeth died in 1603 without a child of her own to succeed her in the throne and she chose her heir. The following King of England was to be Mary Stuart's son, James Stuart. =) And so ends a dynasty and a new one begins. I hope you enjoyed the ride! Thank you for sticking around!